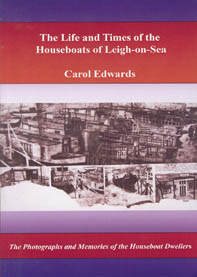 The photographs and memories of the houseboat dwellers, who lived on the Thames at Leigh, between the two World Wars.  When the tide was out their houseboats rested on land owned

by the Salvation Army at Hadleigh Essex.

The story of two entrepreneurs,  Henry Absalom and John Jaquest,  who saw in the popularity  to visit the seaside from the 1800’s,  the opportunity to change their lives.

For the Absalom family, it was bathing machines, beer houses and a large floating bath attached to Southend Pier. The  Jaquests, had  cafes and restaurants close to The famous Kursaal

where they remained serving the tripper good food, from 1901 until the 1940’s. 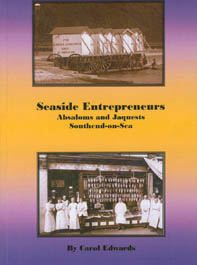 Carol Edwards has been a freelance writer for many years. As well as writing and publishing seven local history books, has had a number of articles published in various magazines as well as two interviews in the local paper.

All books are available at Waterstones Southend, Leigh Heritage Centre or direct from:

The history and development of the highway that travels down from The Broadway to the railway line, from the 1800’s -1980’s.   Learn how the area grew and changed after the coming of the railway in 1854.

Fisherman and farm labourers found themselves living next door to Doctors, artists ,Stock Brokers, bank managers, authors and school teachers. There was also at one time a thriving shopping area on the Hill.

Drapers, butchers, newsagents, hairdressers, grocers,  an off licence and undertakers! 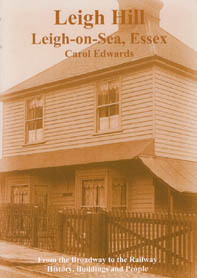 For centuries fishermen and their families have lived and worked in Old Leigh, providing life's necessities were others who shared their space on the High Street. From the 1840's onward's  there were coal merchants, butchers, grocers, drapers, a blacksmith  and even a post office. Alternative  employment came from the public houses,  the gas works, nearby farms and the railway, which arrived in 1854.  With frequent trains from London, more and more visitors came to the town in the summer and this saw an increase in the number of cafe's and restaurants to cater for their needs. Meet some of the families, not connected to fishing, who over the decades have contributed to the history of The High Street Old Leigh. 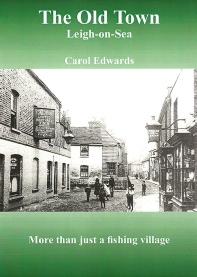 The Broadway was originally called Leigh Hall Road and when the first upmarket houses appeared in the 1800's, was no more than a dirt track. In 1888  the first shop appeared, leading to the conversion of many of the lower part of the houses  to retail outlets. As the developers moved in- notably Frederick F Ramuz, who as well as buying up land, financed the building of The Grand Hotel for one Henry Choppin.  Cinema's, a public house and a library were to follow. Today the Broadway is a thriving shopping area. 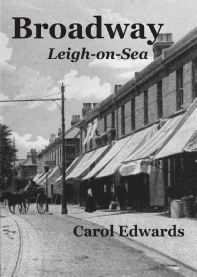 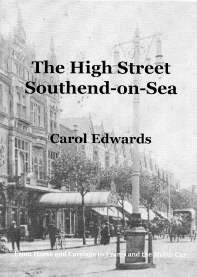 Built on land owned by Daniel Scratton, the Royal Hotel built in 1792 saw the area surrounding the building go on to become what we know today as The High Street. Sometimes known as Whitegate Road and Broadway. By the Edwardian period names familiar to us began to appear. Brightwells, Ravens, Garons, and Keddies. Public houses were built and with the changing times came the cinema and bus transport. This book tells the story of some of the families who helped create the history of this busy shopping area.

This book is currently available at Waterstones, Southend 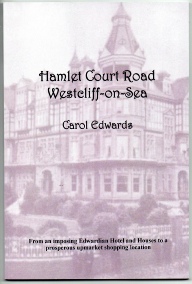 Following the construction of the Queens Hotel near Westcliff  train station in 1899, the development of Hamlet Court Road was soon urbanised with large impressive Edwardian houses. Many of the residents were commuters to London.  It soon became obvious there was a need to provide every day amenities from groceries to ladies and gentlemen’s clothing. Barbers, hairdressers, and in the 1900s names now well known, such as Barclays Bank, Havens, Smerdons, Garons and R A Jones.  There were so many less well known names who contributed to the success of the road.  Some of the beautiful architecture reminds us of Hamlet Courts wonderful history.

Available at Waterstones and the Book Inn, Leigh Broadway

The photographs and memories of the houseboat dwellers, who lived on the Thames at Leigh, between the two World Wars.  When the tide was out their houseboats rested on land owned

by the Salvation Army at Hadleigh Essex.

A Journey Along the Golden Mile

From taking the waters to playing the slot machines, the seafront at Southend-on-Sea has seen many changes.

People from near and far came to serve the needs of the visitor.  From Italy, the Zanchi’s with their restaurants, the Kontil and Black families from Romania, with shops selling fancy goods. Aabraham Kirschner, Austrian, a shell fish bar and Gulielmo Martinali, Swiss, confectioner.

Where there is food there must be drink and Marine Parade numbered several Public Houses.  The 1800’s had the extended Trigg family as publicans, 1960’s saw Harry Threadgold the footballer as the Licensed Victualler of the know demolished Ship.

The Kursaal attracted the Lecorgne and Grecort families from France, with their rides and stalls.  Nearer to home came William Knatchbull and the Newbery-Smiths with their amusement arcades.  Baileys fish and chip shop and Photographer George Pryor, snapping for prosperity the changing face of the tripper.  Their stories have created the seaside we experience today. 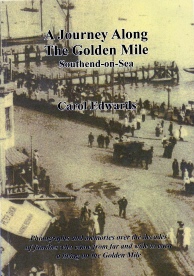 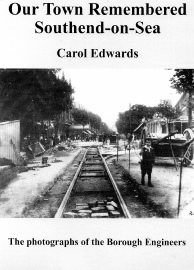 From the 1900’s Southend on Sea’s Borough Engineers and Surveyors were involved with the planning and development of our town.  Recording the growth of the area from the Esplanades on the seafront to the main thoroughfares as they changed from country lanes to major highways.

Many of the images shown in the publication record the history of our town. 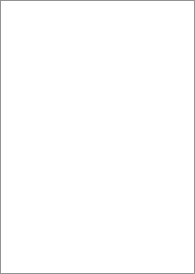